You are here: Home / Lenny Henry

In recognition of his ongoing campaign to address inequality and under-representation in broadcasting. 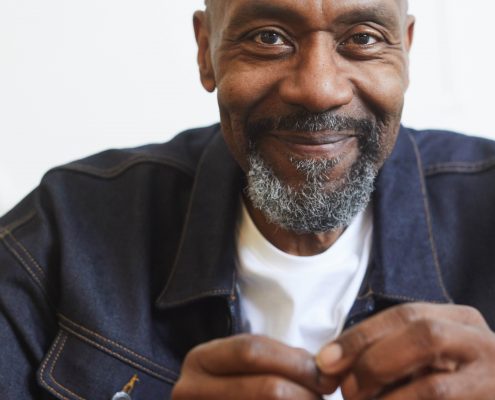 A professional comedian since the age of 16, Sir Lenny Henry has risen from being a cult children’s television star to one of Britain’s best-known and most celebrated actors, as well as a writer, a radio DJ, TV presenter and a co-founder of Comic Relief. But in recent years he’s at least as well-known as an effective campaigner and activist. Since making an off-the-cuff quip about the BAFTAs being “all white on the night” at an awards ceremony in 2013, he has been increasingly outspoken about the lack of diversity in the media and the changes required in the industry, including having given evidence on the subject to Parliament.

Now he’s also given his name to the Sir Lenny Henry Centre for Media Diversity. Part of Birmingham City University, the Centre is the powerhouse behind Henry’s ongoing campaign to promote better diversity and equality of opportunity in the UK’s TV industry.

“Access All Areas: The Diversity Manifesto for TV and Beyond”

“When I began tentatively talking about diversity, what I couldn’t understand was how everyone I spoke to in the industry knew the lack of Black people, women, disabled people (just add your under-represented group here) in the media industry was a real problem and yet the problem wasn’t being solved. Like it was something they could live with, like E.T. in Elliot’s closet, or Eve Polastri in Killing Eve not telling her husband that she is having an on-off relationship with a psychopath who wants to murder her.

“For the record, these things are not sustainable.

“Not only was this lack of representation in front of and behind the camera a real problem in terms of fairness, to me it spelled a looming disaster for the entire industry and society as a whole.

“I know already at that point that it was a problem for the industry because all the figures showed that people were simply switching off terrestrial British television programmes and watching other types of entertainment elsewhere that they felt more accurately reflected their lives. The trends were clear. Non-White people were watching more video-streaming services like Netflix and watching more online content than their White peers. So it was out with Countryfile and in with repeats of The Fresh Prince of Bel Air – yaaaay!

“This trend was not just a problem for the TV industry. It was a problem for the whole of society. Now bear with me as I get a little political and philosophical. What we see on the news determines what politicians talk about and actually do. We’ve seen this most obviously with President Trump and Fox News, and while that might be an extreme case, none of us are immune to the television we watch, the radio we listen to and the news we read.

“But who sets the news agenda? In the UK there is not a single major news programme – from BBC Breakfast News, to the Today Programme, from Panorama to Dispatches – which is led by a person of colour or a visibly disabled person. That is going to affect the stories they choose to broadcast, how those stories are reported and by whom.

“It is not just news that is important. Drama impacts us on an emotional level. It enables us to walk in the shoes of another person and understand their reality in a way factual programmes do not. If we want to understand our diverse neighbours, if we want to be a society at peace with itself and not try to scapegoat one set of people for whatever reason, I believe drama is the best way to do that.”

Extract from “Access All Areas: The Diversity Manifesto for TV and Beyond” reproduced here by kind permission of the authors.

Click here for more information about the Sir Lenny Henry Centre for Media Diversity and their work.