You are here: Home / Awards / Why broadcasting about religion is still relevant

The following article by the BBC’s religion editor Martin Bashir  first appeared in Easter edition of The Radio Times magazine to complement the launch of the 2018 Sandford St Martin Radio Times Readers’ Award in which readers vote in their thousands for their favourite programme exploring religion, ethics or spirituality.  In the article Martin – who has been shortlisted for a 2018 Interview of the Year Award – talks about his own faith and explains why he believes – despite declining religious affiliation in Britain – broadcasting about religion remains a vital and essential public service.

Why Christianity is still relevant this Easter: Bashir describes his conversion to Christianity – and why Easter isn’t just about chocolate 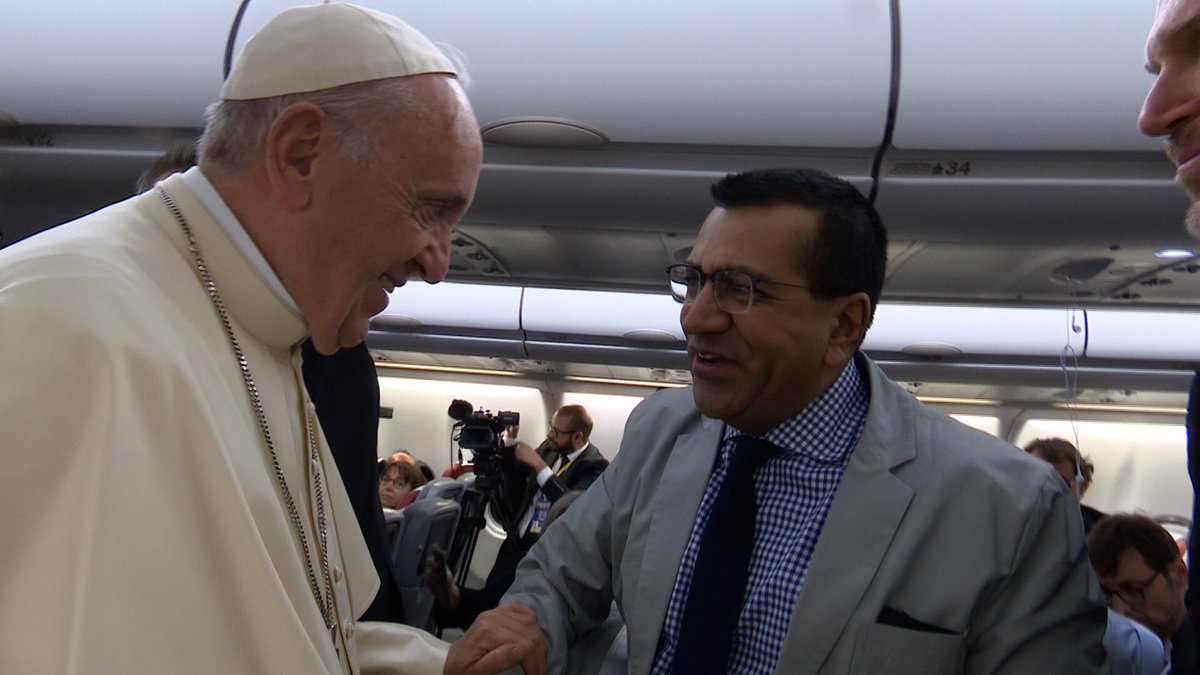 If Christmas is now a secular celebration – described by one newspaper as a season marked by “buying, boozing and bonking” – then what do we make of Easter? Is Holy Week more about chocolate eggs than the Crucifixion of Jesus Christ?

And since the latest British Social Attitudes survey says that more than half (53 per cent) of the British public now describe themselves as having “no religion”, isn’t it time to consign these Christian festivals to history?

Should we accept the advice offered by an advertising campaign on the side of London buses in 2008 that read, “There’s probably no God – now stop worrying and enjoy your life”?

These are some of the questions that I’ve been grappling with since I returned to the UK in 2016, after working for 12 years as a news broadcaster in New York, and became the BBC’s religion editor.

The business of journalism demands objectivity and fairness, but there is no such thing as perfect impartiality because all of us carry our own cultural freight, and I’m no different. My parents came to Britain from Pakistan in 1951, my father having served with the Royal Navy throughout the Second World War.

They would describe themselves as liberal Muslims, firmly embracing of British culture, and did not insist upon attendance at a mosque beyond my tenth birthday. That experience piqued an early interest in theology and philosophy and I found myself embracing the Christian faith in my late teens after attending a church in south London.

But Christians speak of their faith as a journey, or pilgrimage, for good reason. The experience of faith and doubt, of moral failure and repentance, of incarnating what that faith means in practice, is a daily challenge.

In my experience, there is no mastery of mystery. That’s a good thing because, soon after I rejoined the BBC in 2016, the corporation started a series of consultations to consider the audience’s appetite for religion. It was an interesting experience, being appointed to cover a subject that was immediately up for review – one that could have resulted in the religious affairs portfolio being cut.

But the results are in – and that’s not how things turned out. We heard repeatedly that our audiences are interested in moral questions, but are living in a less structured moral environment.

So while previous generations may have considered the possibility of foetal screening or physician-assisted suicide through the prism of a religion, many now ask exactly the same question but without the resources of theology.

Audiences are less interested in the architecture of religion and more interested in how theology and ethical beliefs shape the way we live. Last November, I went to Iceland where not a single mother gave birth to a child with Down’s syndrome after undergoing foetal screening for the condition and being given the choice of a termination.

Denmark has experienced a similar outcome. We interviewed Dr Kari Stefansson, one of the world’s leading geneticists, who explained that, 40 years earlier, when he was in medical school, developing a test for Down’s syndrome was regarded as the Holy Grail. But now, he said, he’s not only worried about “cleansing” countries of certain genetic abnormalities but also that foetal screening might be used to test not just for abnormalities but for talents, too. What then, he asked?

Again, I confess that I’m not detached from this debate. I had a brother, Tommy, with muscular dystrophy whom I loved deeply and whose life was taken by the disease in 1991 aged just 29. From an economic perspective, his value was limited since he never did a day’s work and probably cost the state an additional £200,000 when compared with an able-bodied child.

I can’t imagine my life without Tommy having been part of it, and he became the motivation for so many of my best endeavours, from sport to work. But who decides on the value of a life?

Interestingly, Judeo-Christian writing offers an important principle known by the ancients as “Imago Dei”. It is the belief that each individual is made in the image of God, regardless of status, wealth, achievement or social standing.

It’s the principle that led William Wilberforce, a politician of deep faith, to fight against slavery in the early 19th century. The Imago Dei has shaped countless causes over the centuries and it comes from the pages of scripture. Our worldview (or belief if you prefer) shapes everything from how we parent our children to how we die – and religion plays a formative role in this area.

It’s worth pointing out, since the BBC also provides content for the World Service, that declining religious affiliation in Britain is not shared around the globe. According to the Pew Research Centre in 2015, 84 per cent of people affiliate with a religion worldwide and this is predicted to rise over the next few decades.

Within the UK, Christianity has become less a faith by inheritance and much more one of choice. So the tradition of church attendance has declined, but those who do affiliate with a denomination tend to be committed and active participants.

Grace Davie, in her book The Sociology of Religion, says, “In Europe as well as America, a new pattern is gradually emerging: that is a shift away from an understanding of a religion as a form of obligation and towards an increasing emphasis on… choice.”

This could also explain why the majority of food banks in Britain are run by churches, and why faith leaders played such an important role in the aftermath of the Grenfell Tower fire. A religion of choice, as opposed to inheritance, tends to produce strong disciples.

For myself, Easter Sunday will be a working day, which starts early with BBC1’s live coverage from Rome as Pope Francis delivers what is known as Urbi et Orbi – a papal address to the city and the world. We’ll then switch our attention to Canterbury, where Archbishop Justin Welby will deliver his Easter message.

Across all our platforms, we’ll be reporting what these leaders have to say as Christians around the world celebrate what they believe happened to Christ during that final week of his life: that he was crucified, died and was then raised from the dead.

In many ways, it’s not surprising that the secular world has been able to co-opt Christmas, centred as it is around the birth of a baby in a stable – the stuff of many a child’s Nativity play. But Easter is for grown-ups.

The Christian faith speaks of Christ’s death on the cross as an atoning sacrifice for all our sin and wrongdoing. And in his resurrection, the opportunity to start again.

While I’m as keen as anyone on chocolate, it can’t be the only thing we think of when it comes to Easter Sunday. Can it?

Our thanks to The Radio Times for allowing us to reprint this article.

You can find out more about the Sandford St Martin Radio Times Readers’ Award here (voting closes on 21 May 2018).

Maintaining Faith in the Mainstream Media
Scroll to top