Archbishop of Canterbury calls for greater religious literacy in the media

You are here: Home / Archbishop of Canterbury calls for greater religious literacy in the m...

Archbishop of Canterbury calls for greater religious literacy in the media 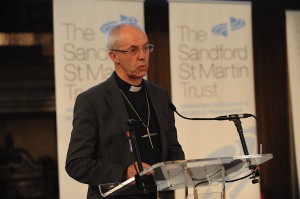 In a keynote speech delivered to open the 2016 Sandford St Martin Awards ceremony at Lambeth Palace, the Rt Rev Justin Welby, Archbishop of Canterbury called on UK media to treat religion “with the same seriousness as other genres like sport, politics, economics or drama”.

“The promotion of religious literacy should be a specific duty for the BBC across its broadcasting services” the Archbishop of Canterbury will say referring to last month’s white paper on the BBC.  “BBC charter renewal, and questions about the ownership of Channel 4, have focused to some extent on the diversity of people who make up our islands and who constitute the audience of our great broadcasting institutions.  But if diversity is to mean anything, it must mean more than differences in ethnicity or personal tastes… True diversity also means paying proper attention to religion.”

Roger Bolton, a Sandford St Martin trustee and the presenter of BBC Radio 4’s ‘Feedback’ programme said: “We are concerned that while the Corporation continues to broadcast some excellent religion and ethics programmes, in the light of proposals recently made in the Government White Paper that the BBC does not have a clear strategy for supporting the genre in the future.  There is no one in the corporation with overall responsibility for religion. Can the BBC give assurances that it will invest in the specialist knowledge and expertise necessary for religion to be given proper priority?”

The Rt Rev Nicholas Baines, Lord Bishop of Leeds and the Chair of the Trust said “Religion is a prime motivator of individuals and communities, inspiring and informing their political, economic, ethical and social behaviour.   So we’d like to propose an addition to the public purposes proposed by the white paper.  In addition to ‘raising awareness of the different cultures and alternative viewpoints that make up (UK) society’ we propose that the BBC should reflect and interpret the many religious communities that exist in the UK with the aim of building a better understanding of the beliefs people hold both between those communities and by UK audiences as a whole.”

You can read the full text of the Archbishop of Canterbury’s speech on the Lambeth Palace website, listen to the speech here or watch the video.