You are here: Home / children's radio 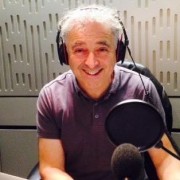 The Sandford St Martin Trust has been making annual awards for the best radio and television programmes about religion, ethics or spirituality since 1978 – so, by comparison, our Children’s Award is still something of a youngster.  Ah, but what a precocious and forward-thrusting youngster it is!  Last year’s judging panel was chaired by the writer and broadcaster Frank Cottrell Boyce.  Below is the speech Frank delivered on that night – both a celebration but also a passionate argument for the importance of children’s broadcasting.

“I’d like to begin by thanking my fellow judges Rachel Moseley, Anna Bassi and David Hallam because we had such a great time!  We had such a great time judging this list.  Not just because all the work on it was so impressive but because there was something really rejuvenating and moving about seeing just how much ambition and creativity and commitment people had put into making these films.   Long running series like Newsround which you can see really upped its game to deal with the Hiroshima story.  And those little films that you saw from True Tube – people had really kind of stretched.  You could feel how much they had stretched their resources and their imaginations to help young people deal with those big, big questions.   We saw animation and dramatisation and historical testimony: huge palettes of techniques being brought to bear on these questions.

“When young people engage with questions like immigration, sexuality and their own mortality and morality, they’re not puzzling over intellectual questions, they’re building their own identities.  And in doing that they are building the future identity of this nation.  So huge praise is therefore due to the BBC who, among all the broadcasters, absolutely – to use a teenage phrase – “owned” this shortlist.  The absence of the commercial broadcasters from it, I think, is depressing – but also really dangerous.  I’m going to follow the Archbishop’s lead in quoting Simon Schama who said that our society offers our young people two options: shopping or extremism.  And if our cultural arbiters vacate the field on which our young people wrestle with the great questions, then other forces will step in.  These are questions which have to be answered.  And if we don’t help young people grapple with the complexity of those questions, then there are other people who will cheerfully come along with murderously simple answers.  To leave a gap in the schedule around this area is to leave a hole in our nation’s heart.

“Having said all of which both the winner and the runner-up celebrated the resourcefulness, the resilience and, most of all, the kindness of children.

Our runner-up gave one of the most heart-stopping moments of television I’ve seen in a very very long time.  In the clip you’re about to see, Ella has just completed a sponsored run for her Grandad who is suffering from Alzheimers.

“Tonight’s winner, just like the runner-up, comes from the world of scheduled television.  I love my podcasts.  I love YouTube as much as anybody and I think that iplayer is one of the great wonders of the world.  But the downside of choice is that it can also lead us to create our own digital safe spaces – so, God bless the Radio Times.  I was emotionally ambushed by Ella’s Grandad and our winner, too, did that thing that really only scheduled television does best of all, which is to make you really care about something you didn’t really think about that much before.  To put a human face on a big political story – and what a face!  A boy named Ahmed who has swagger, and insight and eloquence and, above all, a bicycle.  So I’m really really delighted to announce that the winner of this year’s Sandford St Martin’s prize for Children’s broadcasting goes to My Life: The Boy on the Bicycle which was made by Drummer TV for CBBC’s My Life. “