Blog - Latest News
You are here: Home / To Lambeth Palace…

For 2015 the Sandford St Martin Trust kicked off its annual celebration of exceptional programmes about religion, ethics and spirituality with the announcement of a new Children’s Broadcasting Award.

In addition to its Radio and TV categories, the Children’s category is for broadcast content aimed at under 18s which improves young people’s understanding of religion and/or introduces them to moral or ethical issues.  And the response has been phenomenal!

“At a time when religion is once again central to world and British politics, and to our culture and that of immigrant communities, it’s critical that children and young people are exposed to imaginative works that open their eyes to the world they share and the beliefs people hold.”

Kath Shackleton is an Award winning Producer at Fettle Animation and was one of those behind the moving animated film Children of the Holocaust made for BBC Two. 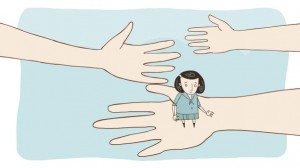 A new adventure coming up for us.  Made another prestigous shortlist!

We’re off to Lambeth Palace (the Archbishop of Canterbury’s place!) next week (27th May) for a Sandford St Martin’s Childrens Award, a celebration of ethical and religious broadcasting.

Our Children of the Holocaust films are in just incredible company – check out the shortlist. Our category includes films by CBBC, CBeebies, CVTC and Taylormation – all brilliant stuff.  So pleased to have been nominated and to have our work endorsed by such a well respected organisation.

In times that seem to have been becoming increasingly polarised between those with completely secular beliefs and those with rather more extreme religious views, I believe that religious broadcasting is an important bridge for those with differing views to come together to explore common ground.

Ever curious, I asked a little more of the organisers, who seem like a lovely bunch of people.

The Sandford St Martin Trust was set up approximately 35 years ago by the Wills family to reward  television and radio programmes of religious excellence. They have tried to move that towards moral, ethical and spiritual as well as religious over the years and some highly acclaimed programmes have won awards in the past.   Simon Schama the Story of the Jews : David Suchet, In the Footsteps of St Paul, and Tony Jordan for Nativity are among recent TV winners.

The Trust is governed by a group of Trustees who come from a variety of backgrounds, financial, PR, religious and programme makers.

Judging the awards must be a really tough call –  Broadcaster and journalist Sharmini Selvarajah said of the judging the children’s awards.

Although I was interested in religion throughout my childhood and teenage years, I don’t remember ever being engaged with religious ideas at school, or through the mainstream media.

I was particularly impressed with the high production values of many of the submissions. It’s true that some came from big production companies, but many of the specialist films aimed at schools were beautifully made with limited resources

Looking forward to a fabulous evening.

Now, what to wear? … time to go shopping I think!

The Best in Religious Broadcasting
Scroll to top