You are here: Home / Maintaining Faith in the Mainstream Media

Religious broadcasting has had a rocky 40 years – but it is now being taken more seriously than ever, says Torin Douglas who was the BBC’s media correspondent for 24 years, and is a Sandford St Martin Trustee, in a column that was originally published in the Church Times and is reproduced here by their kind permission.

On June 7th 2018, broadcasters and faith leaders gathered in the 13th Century Great Hall at Lambeth Palace for the annual awards for programmes exploring issues of religion and ethics. The occasion will also mark the 40th anniversary of the Sandford St Martin Trust, which runs the awards – and it has reason to celebrate.

Two years ago, the Archbishop of Canterbury, Justin Welby, galvanised the awards audience – and stung the higher echelons of the BBC – with a call for the media to treat religion “with the same seriousness as other genres like politics, economics, drama or sport”. He said it was impossible to understand the world today without an understanding of religion: the BBC needed to raise its game and should be given a duty to promote religious literacy.

The Archbishop quoted the words of Simon Schama – a Sandford award-winner for his BBC Two series The Story of The Jews: “My generation grew up thinking that religion was completely marginal to British life, which, as for the rest of the world, has been proved more and more wrong…”

The message hit home. The BBC began a year-long Religion and Ethics Review and – despite a W1A moment, when it closed its in-house religion and ethics TV department and outsourced Songs of Praise halfway through the review process – the Review accepted much of what the Trust and its supporters had been saying about the need to reverse the decline in religious and ethical broadcasting.

The BBC said they would “raise our game across all output” and “increase specialist expertise with a new Religious Affairs Team and Religion Editor in News”; “reach as many people as possible with landmark series and cross-genre commissions”; “diversify our range of contributors, increase coverage of religious events and enhance portrayal in mainstream programming”. 2019 would be designated a Year of Beliefs, with programmes aimed at mainstream audiences on radio and television – as well as those with a faith perspective.

Not before time, many would say.

There has been a dramatic reduction in the amount – if not the quality – of religious programming on TV since the Sandford Trust was set up in 1978. Its mission was “to promote excellence in the areas of broadcasting concerned with religious, spiritual and moral values and experience”. The Trust was the initiative of Sir David Wills, an Anglican layman keen to develop Christian involvement in broadcasting. He had funded a studio in Church House in Westminster, for broadcast interviews and training, and named the Trust after the Oxfordshire village where he lived.

Forty years ago, Britain was a different place, not just in social terms but in media too. There were just three TV channels, broadcasting only in the afternoons and evenings, and commercial radio was in its infancy. All broadcasters were required to make religious programmes and most had clerics on the staff or as religious affairs advisers, under the beady eye of the bishops and the Central Religious Advisory Committee (CRAC). On Sunday evenings, television still had a 35-minute “closed period” devoted to religious programmes, known as the “Sunday Break” (till 1977 it was twice that long).

“40 years ago, religious broadcasting still felt itself a national chaplaincy service” says David Craig, who became the Trust’s secretary after 20 years in BBC religious programmes. “With few exceptions, most of its senior staff were clerics for whom the BBC was an antechamber to clerical preferment, and of course men!”

The biggest change has been at ITV. As public service requirements were relaxed or eliminated, ITV coverage of religion and ethics virtually disappeared. Its spend dropped – according to Ofcom – from £40 million in 2008 to £2 million in 2013. In 2004 it committed with Ofcom to 104 hours of religion. In 2005, Ofcom allowed that to be halved and in 2012 ITV showed just 2 hours of religious programming, though it has since been commended for its portrayal of clerics in dramas such as Broadchurch and Granchester.

By contrast, at Easter 1977, ITV broadcast Franco Zeffirelli’s epic Jesus of Nazareth, made by Lew Grade’s ATV and watched by millions across the UK and around the world. That autumn, ITV showed Granada’s 13-part history of Christianity, The Christians, written and presented by Bamber Gascoigne and filmed in 30 countries.

Those programmes pre-dated the Sandford awards – but ITV would pick up many of the prizes over the years. Thames Television won the Sandford Trust’s first TV award with its documentary Basil Hume OSB, a profile of the monk who in 1976 became the Roman Catholic Archbishop of Westminster. Cardinal Hume came to Lambeth Palace for the ceremony, where he was photographed with the Archbishop of Canterbury Robert Runcie. See picture.

Archbishop Runcie had also attended the inaugural Sandford Awards, for radio programmes. The top prize was won by BBC Radio 4’s God In My Language, made by David Winter who later, as the BBC’s head of religious broadcasting, would launch Sunday, Radio 4’s religious news programme, and The Moral Maze, which won last year’s Sandford Trustees’ Award. 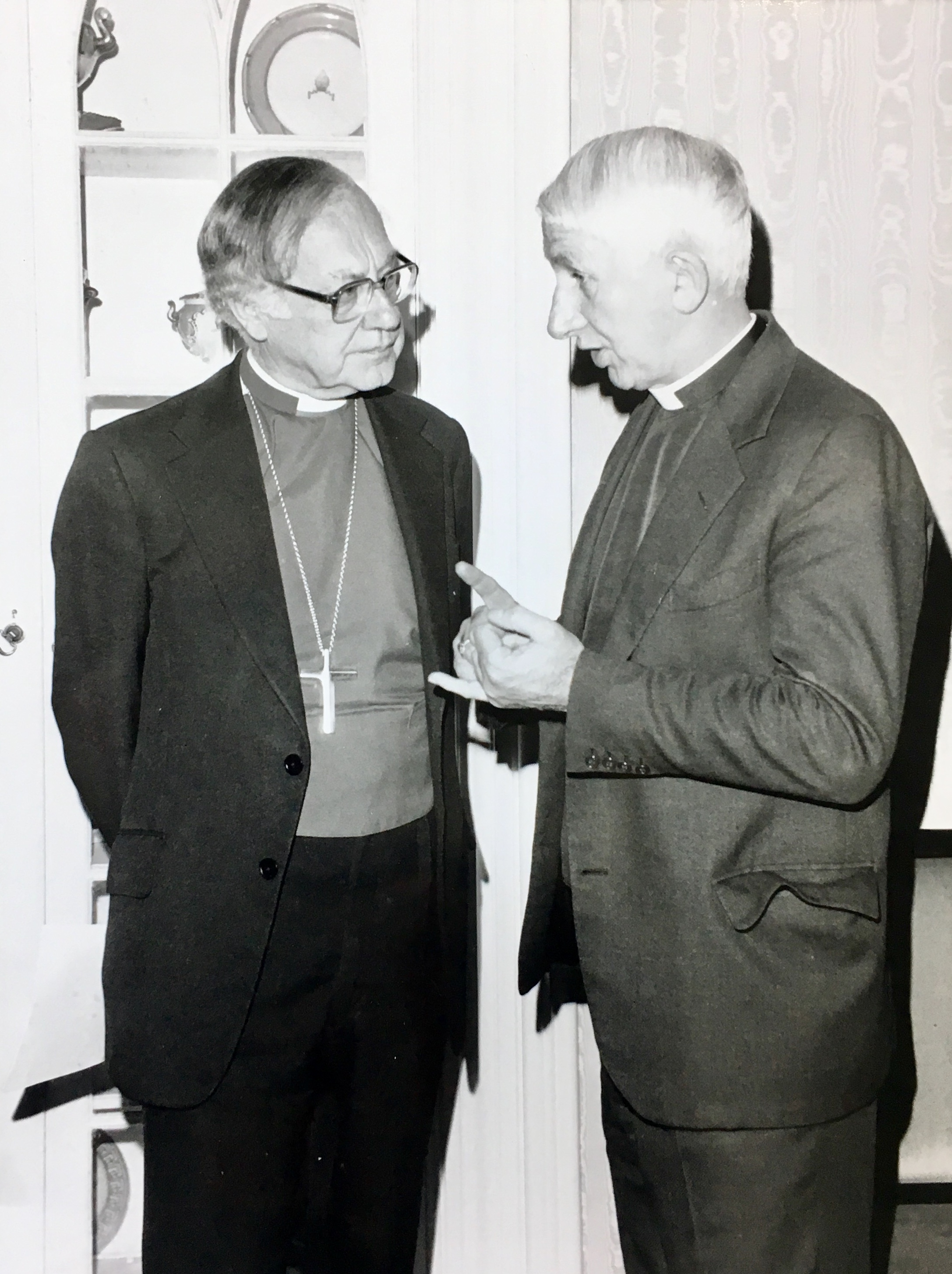 Runcie’s son James would win a Sandford award as a BBC producer and also write the novels on which Grantchester was based. He called it “Morse with morals” and the series won the Radio Times Readers prize in the 2015 Sandford Awards. https://sandfordawards.org.uk/the-awards/awards-archive/#tab-id-3

Early Sandford Awards ceremonies were attended by chairmen of the BBC and Independent Broadcasting Authority. Chairs of judges included those at the very top of broadcasting – the BBC’s Sir Huw Wheldon and Frank Gillard and the IBA’s Sir Brian Young – as well as the Rt Revd Hugh Montefiore and the writer and Church Times columnist Ronald Blythe.

Right from the start, the Trust set out to influence broadcasting policy. In 1980 it stated: “The Trust is seeking to encourage and foster Christian involvement in planning for the Fourth TV channel, due in the autumn of 1982.”

Channel 4 was indeed required to produce religious programmes but it also had a remit to  be different, so its chief executive Jeremy Isaacs decreed they should never be shown on Sundays! Over the years, C4 won several Sandford awards, as did high-profile series such as LWT’s Credo and the BBC’s Heart of the Matter and Everyman. There was recognition too for the ever-popular hymn series, Highway and Songs of Praise.

But the arrival of multichannel TV brought greater competition for viewers and advertisers, and religion’s safe slots and budgets came under increasing pressure. ITV abandoned the Sunday evening “closed period” in 1993, at about the time that the BBC’s religion and ethics department was banished, kicking and screaming, to Manchester. When the Revd Ernie Rea complained that he needed to be near the religious leaders in London, he received little sympathy. Will Wyatt, the BBC’s Managing Director, Television, wrote in his memoirs: “That didn’t wash. Manchester was as close to his ultimate boss as London”.

Yet despite diminished resources and slots, outstanding programmes about religion and ethics – and all faiths – are still being made, both for radio and television, as the Awards Archive on the Sandford Trust website clearly shows. https://sandfordawards.org.uk/the-awards/awards-archive/

Sandford award-winners have included high-profile presenters such as Rageh Omaar, David Suchet, Sally Phillips, Ian Hislop and Simon Shama, and popular and engaging dramas like The Nativity, Call The Midwife and Grantchester. There are now also awards for the best interviews and children’s programmes in this area.

And, as the BBC Review demonstrates, the Trust is making progress in its mission “to promote excellence in broadcasting concerned with religious, spiritual and moral values”. Under its immediate past chair Nick Baines, the Anglican Bishop of Leeds, and with proactive trustees such as the Feedback (and former Sunday) presenter Roger Bolton and former Radio Authority chief executive Tony Stoller, the Sandford Trust has helped co-ordinate the efforts of faith leaders, Parliamentarians and others to persuade broadcasters of the need to take religious broadcasting more seriously. It has stimulated debate through partnerships with the Edinburgh International TV Festival, the Sheffield International Documentary Festival, the Media Society, the NUJ and others.

This week, to mark the 40th anniversary, the Trust’s new chair, the Rt Revd Jan McFarlane, Bishop of Repton, will launch a Friends scheme to further its work championing excellent programmes and reversing the decline in religious broadcasting. In doing so, she will quote the words of the late AA Gill, TV critic of the Sunday Times:

“Religion has never been more tangible in world affairs and public life. Not having more sensible and religious broadcasting isn’t modern, it’s a failure to face modernity.”

To see the full list of  Sandford St Martin Awards winners since 1978, visit our archive pages.

The winners of the 2018 Awards can be found here.

Can reality TV tell us anything really important?
Scroll to top