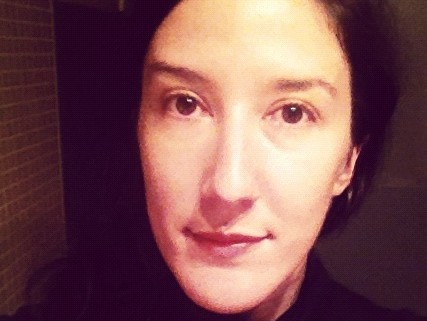 Over the past decade Poland has been experiencing what many people are calling a “Jewish revival” – fuelled in large part by a growing number of young people who are discovering their religious roots.  In 2014 Denise Grollmus and Sarah Peters won a Sandford St Martin Award for their moving and inventive podcast based on Denise’s own exploraton of her Polish-Jewish identity.  Here Denise reflects on the experience and her reaction when she found out her podcast had been nominated for a religious broadcasting award.

When Sarah Peters, the producer of Sounds Jewish, told me our podcast, “The Jewish Revival in Poland,” was nominated for a prestigious broadcasting award, I was definitely flattered and excited. But I was also a bit confused. The Sandford St. Martin Trust is dedicated to promoting religious broadcasting. Why, then, had we been nominated?

First, as an American, I have a very specific and unflattering understanding of religious broadcasting. To me, religious broadcasting is little more than the corrupt world of televangelists like Jerry Falwell and Billy Graham—men with bad toupees who preach fire and brimstone and promises of salvation in order to terrorize their viewers and listeners into parting with their savings. I knew that world well after I reported on Rex Humbard, the father of televangelism, in 2007. The title of my story was “Jesus for Sale,” which exactly encapsulated what I thought religious broadcasting was.

Of course, that is a severely limited and unfair definition of what religious broadcasting is and can be. But even in a broader sense, our podcast still didn’t strike me as particularly “religious.” Though the piece we made was by and about Jews for a program funded by the London Jewish Community Centre (JCC) called Sounds Jewish, I understood our podcast as a strictly cultural piece of narrative journalism for a general audience of international listeners of all faiths and backgrounds. Not only is Sounds Jewish produced for The Guardian, but also our piece was interested in Jewishness not from a strictly religious perspective, but from a more complex understanding of what Jewishness is as a cultural, historical, religious, ethnic, and sometimes national identity that can not be limited to any one category. Furthermore, our piece wasn’t interested in Judaism generally, but in the reemergence of Jewish life and culture in Poland specifically.

It was also a piece about me. And I’d describe myself as anything but religious.

In fact, my religious background is incredibly complicated. While I was raised Catholic, it was the discovery of my grandmother’s (and therefore my own) Jewishness that had brought me to Poland in the first place. Like many of the Poles I’d interviewed, I, too, had stumbled across my own Polish Jewish roots late in life. My maternal grandmother, who had been born and raised in Warsaw, Poland, had gone into hiding, changing her name and her identity, so that she could survive the war. Even after the war was over, she decided to keep her Jewish identity a secret from our family until I was 28 years old. Ever since she told us the truth about who she was, I’d been obsessed with my family history, the history of the Polish Jews, and the revival of Jewish life in Poland, where I found a community of people just like me.

That’s also how I’d found myself living in Warsaw on a Fulbright grant in order to research and write about this cultural phenomenon. I had been living in Warsaw for seven months when Sarah first contacted me. She had read a story I’d written for Tablet Magazine about Poland’s Jewish revival—a piece that coincidentally did focus more specifically on the religious aspect of this much larger story. There was a chance, she said, that she was coming to Poland to do a story on the subject and she wanted me to tell her more. As we talked for nearly an hour about adult Hebrew schools and contemporary Polish perspectives on the Jews, Sarah asked how and when I’d become interested in this topic. That’s when I had to admit that my investment wasn’t purely academic or journalistic. It was personal. When I was done telling her my family’s story, the line went silent. “You should present the podcast. You should tell it through the lens of your family’s story,” Sarah said.

Two weeks later, Sarah and I met in Krakow, where we worked 15-hour days interviewing everyone who was willing to speak to us, and then headed to Warsaw to do the same, until we had more than 30 hours of audio. It was very important for us to cover all the nuances of this very complicated story—one with ties not only to the Holocaust, but also to Communism and the fact that Poland was once home to the largest Jewish communities in the world. We wanted listeners to understand the historical conditions by which the Jews had all but disappeared from Polish life and then exactly how Jewish life began to reemerge. We interviewed not only the Head Rabbi of Poland and members of the JCC Krakow, but also non-Jewish Poles who had made it their life’s work to revive and preserve Poland’s rich Jewish history and cultural legacy. We never conceived of it as a story about religion, but as a socio-historical story about trauma, inheritance, and healing.

Our podcast was posted online on June 5, 2013—the same week that The Guardian was making waves for its reporting on Edward Snowden. Even in the shadows of such huge breaking news, I was extremely proud of what we’d made and I was glad that it was in the world so that anyone could hear it. A month later, I returned to the United States, where my time in Poland often felt like little more than a dream. Then, almost a year later, Sarah wrote me with the news that we’d been nominated for a Sandford St. Martin Trust Award, which we eventually won for the “Best Local, Community, and Online” program.

Despite my initial misgivings about our podcast being defined as “religious,” I eventually embraced such an understanding of our work. It wasn’t simply the fact that we won, but also, after much thought, I finally realized how important it was to understand what religious broadcasting could be in a much broader sense. In today’s world, we sometimes emphasize the absolute divide between the secular and religious to a fault. In fact, much of what we understand as “secular” or “non-religious” has a crucial religious dimension that we willfully ignore in our attempt to see ourselves as rational actors beyond the hocus pocus of religious belief. We fear that by acknowledging the ways in which our behavior, our history, or our beliefs might be implicated in religious thought and traditions, we might be revealed as unenlightened, medieval, or irrational.

But ultimately, what I’ve learned through my own research is that culture is almost always implicated in the religious, both good and bad. To deny this fact is to ignore the whole truth of who we are and where we’ve come from, as well as to perpetuate some of the more unseemly prejudices and behaviors that we’ve inherited from religious practice. After all, though Communist thought insisted on its opposition to religious belief, the exile of Poland’s remaining Jewish community by Poland’s Communist government was not unlike those exiles perpetuated the Catholic Church in previous centuries.

To that end, winning a Sandford St. Martin Trust Award was much more than an honor or a professional accolade. It also offered me the chance to interrogate my false assumptions about what we deem as religious or not. Just as our podcast revealed, things are not always what they seem and it is in what is not immediately obvious that we learn the most about who we are.

Don’t forget, the 2015 Sandford Awards  – for programmes that explore who we are, where we come from and the role that religion can play in our lives – are now open for entries.

You can listen to Denise’s 2014 Award-winning programme here: http://www.theguardian.com/commentisfree/audio/2013/jun/05/sounds-jewish-podcast-poland

Do they know what Christmas is?

With a restructure in the offing, what is the future for Religion at the BB...
Scroll to top