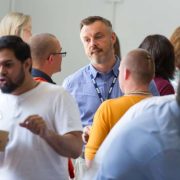 Given current geo-politics and the nature of conflict and social strife across the globe, religious literacy has become more important than ever – and journalists and broadcasters have a key role to play. Because religious literacy is not only an understanding or familiarity with religious texts or practices, it’s also an understanding and appreciation of how people’s beliefs or religions shape their politics, their communities, their relationships and their hopes for the future. And so for journalists, if you’re lacking the tools or experience to understand the role religion or belief plays in human affairs, you’re unequipped to properly understand or communicate to your audience what the story is. Religious literacy matters. Increasingly so.

In Wales, NUJ Training has been energetic in helping journalists engage with belief (and in helping belief communities to engage with journalists) by offering participants expertise, resources and the opportunity both to examine their own personal viewpoints while honing their professional skills.

In November 2016, two young Sandford St Martin interns blogged for us about “When Religion Makes the News” the first NUJ Training workshop held with ITV Wales.  Below the Welsh journalist and trainer Angela Graham, writes about their latest event “Reporting Belief 2017” held in May.

This blog was first published on the NUJ Training Wales website and is reproduced here with their kind permission.

Photographs are by Natasha Hirst @HirstPhotos

Reporting Belief 2017: an appetite for engagement

What a day! At Reporting Belief 2017 on May 10th (#RB17) two ‘communities’ who often clash − journalists and ‘believers’ – came together to understand one another better. Of the 88 people who attended, 44 were journalists from press, broadcast and online media.

An immediate, ground-breaking result is ITV Cymru Wales’s offer to do a series of feature reports of around 3 minutes on their nightly news show Wales At Six on a range of belief groups in Wales over a period of around a year.

In the context of the BBC’s current review of its output in Religion, Ethics and Philosophy this commercial broadcaster’s imaginative initiative – beyond the terms of its licence − raises the profile of belief on English-language TV in Wales at a stroke given the scant provision by BBC Cymru Wales of English-language factual TV output in these areas.

But this was a day focused on news, and on quality of engagement rather than breadth of output.

Two ‘communities’ wanting to engage: understanding ‘those who are not like us’

Reporting Belief 2017, held on 11th May at BBC Cymru Wales’ Cardiff centre, followed on from When Religion Makes the News (#ReportingBelief16) last November, a workshop for journalists and representatives from the spectrum of beliefs and ideology in Wales about religious literacy and the reporting of belief.

At #RB17, representatives of religions, and of belief systems such as humanism, shared with journalists ways in which they feel misunderstood and misrepresented; journalists, in turn, explained their frustrations with belief communities who don’t engage well with the realities of the media.

This was a bold example of collaboration to address a challenge that affects us all: how to understand those who are not like us, in this case in the area of faith and belief. The mutual willingness to overcome these gaps demonstrated a readiness for a new kind of relationship.

Reporting Belief 2017 is at the forefront in meeting a need that is felt ever more acutely by communities around the UK. Dr Sheila Gewolb, Vice President of the Board of Deputies of British Jews, recognised this warmly in saying, ‘We applaud your event. This particular kind of encounter and dialogue is not happening in London. The Board of Deputies is taking a keen interest in it.’

There can be no doubt now of the appetite for training and resources – journalists need input which helps them both understand the complexities of belief (whether religious or secular) and the journalist’s role in interpreting the effects of belief on society; ‘believers’ need opportunities to learn how to engage productively with the media.

Filling the training and research gaps in religious literacy

How can such training for journalists be resourced and provided? A case is building for universities in Wales to bring religious literacy into the curriculum for journalism courses, at least at post-grad level. Cardiff University School of Journalism, Media and Cultural Studies is ‘actively discussing’ this option.

But it is essential, in such training, to have objective expertise in religion and belief that is independent of institutional or credal claims. There is a pressing need for research related to Wales, currently under-represented in resources in this area.

Media organizations themselves can examine the adequacy of their in-house training.

A case-study in journalistic practice

The day began with a session for journalists: Muslim Communities – connecting with the grassroots. Three experienced BBC journalists offered best practice advice, chaired by Dr Michael Munnik from the Centre for the Study of Islam in the UK at Cardiff University.

He recommended getting to know the networks of Pakistani journalists in the UK, explaining that many are not full-time but are resourceful and well-connected at local levels, aspiring to do good journalism. “Stories come from relationships”, he said. The centrality of relationships was a mantra throughout the day.

Yasminara Khan is a journalist at BBC Newsnight who has done much work on Asian women’s issues. She stressed the importance of ‘talking to everyone’ and of getting strong case studies which only come if you show you are trustworthy: “If people feel you can deliver that story accurately they will give it to you.”

Innes Bowen is the author of Medina in Birmingham, Najaf in Brent: Inside British Islam, about the networks behind the UK’s mosques. She is in charge of investigations at BBC Newsnight. She encouraged journalists to make good use of their personal strengths to create connections widely with people. She is “into analytical journalism, the detailed stuff” and this had led her to spot novel angles such as a story about the inadequacy of the census returns concerning Somalis which led to them being under-represented and their interests under-funded. But, she stressed, this needs to be supported by a willingness to invest time with people, to spot a story in what, at first glance, appears to be a Public Service Announcement.

The need for open fact-sharing

A lively plenary session followed in which the broadcasters’ records on diversity and portrayal were challenged, as were some of Innes Bowen’s statistics about the managements of mosques in Wales and inferences that can be drawn about the denominational allegiances of worshippers from those of mosque management committees. This exchange underlined the need for both open fact-sharing and discussion of perceptions and experience.

This was an event full of variety and of life. The ‘believers’ who attended, whether religious or secular, are engaged with living meaningful lives; journalists thrive on the vital, the real, the now. Above and beyond the frustrations with each other is a common desire to communicate things that matter.

The NUJ Training Wales website will shortly add to its religious literacy resources some additions arising from the day.

The event was free due to NUJ Training Wales’ funding from Welsh Government and support in kind from BBC Cymru Wales and C4CJ. Currently, the NUJ is exploring funding sources to continue this important, innovative work.

Feedback from the event shows an appetite for greater in-depth encounter between journalists and believers.

Beyond News, the ways in which broadcast genres engage with Religion and Belief, Ethics and Philosophy (via news, current affairs, documentary, factual formats, drama etc) across radio, TV and online require careful distinction and consideration; as do the claims of these areas within a Public Service Broadcasting and a Commercial media menu. But that’s another chapter in the story.

You have permission to use these photographs for purposes related to this event (e.g. for newsletters). If you would like to use any for general purposes such as a profile picture on your website please contact