The BBC has listened; now for action

You are here: Home / The BBC has listened; now for action

The column below, written by our Chair, the Rt Revd Jan McFarlane recently appeared in the Church Times in a response to the BBC’s publication on December 20 – just in time for Christmas! – of the results of its year-long review into the corporation’s own religious and ethical programmes policy.

Among the review’s recommendations are the at the BBC should increase coverage of non-Christian faiths, introduce faith-related story lines into popular drama, incorporate greater religious understanding into news reporting and create a global team of reporters with religious expertise, under a newly established religion editor.

All of which is heartening news for us as we’ve actively lobbied the BBC on the same – and particularly on the importance of religious literacy and expertise in news rooms – for many years now.  Tony Hall, the BBC’s Director General, told the The Times that the proposals “will ensure the BBC better reflects the UK the world and the role that religion plays in everyday life.  They will also raise understanding of the impact religion has on decisions made at home and abroad” and we very much hope he’s right.

At the final count, the BBC’s review involved consultations with more than 150 expert stakeholders and faith leaders including our recently retired Chair (and now patron) Bishop Nick Baines, our current Chair Bishop Jan McFarlane, as well as some of our trustees and many of our partners. As an organisation we very much welcome the review … which is not to say we think our work is done!  With thanks to the Church Times, you can read Bishop Jan’s column below.

And if you want to read the review itself, that’s available here. 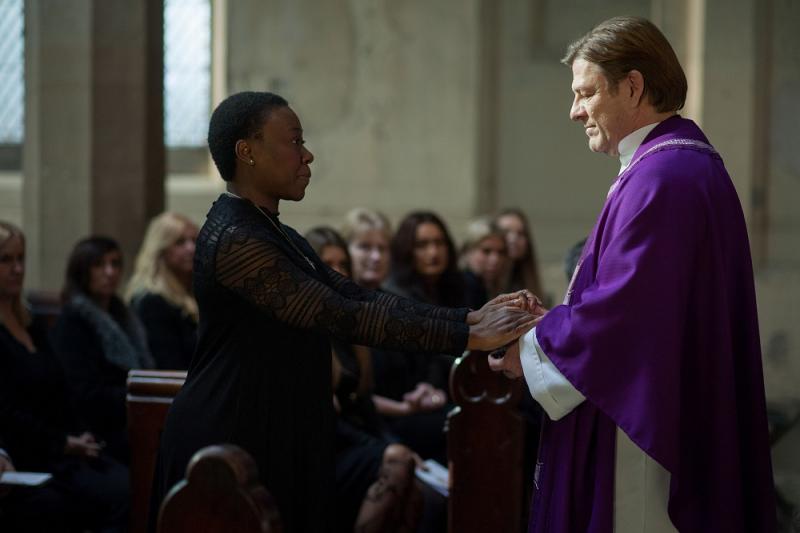 Compulsive viewing for many of us over the summer was the BBC1 series Broken.

It was not an easy programme to watch. Dark and brooding, Sean Bean’s character, the Roman Catholic priest Fr Michael Kerrigan, struggling with his own demons and failures and doubts, showed us what it really means to be a priest. Not some goody two-shoes, high up on a pedestal, never putting a foot wrong, confident, loud, and shiny, but a broken human being, whose greatest ministerial strength emerges from his very brokenness.

Viewers of Broken could not help but see that the common popular view among people who reject Christianity — that Christians have life all sewn up, and sit in judgement on those who do not live up to their high moral standards — is a misconception. Christians are not perfect. We are forgiven.

Every day, we encounter misconceptions about Christianity and the other main world religions. “Is your cathedral open on Christmas Day?” elicits a wry smile, but is an innocent mistake that harms nobody. At the other end of the scale, ignorance and misunderstanding result in violent anti-Semitism and the demonising of Islam.

We are told that 84 per cent of people around the world are affiliated to a religion, and this figure is set to rise over the coming decade. In a nutshell, we cannot understand our world today unless we understand religion.

For this reason, the Sandford St Martin Trust, which advocates excellence in religious broadcasting, under the leadership of its former chairman, the Bishop of Leeds, the Rt Revd Nick Baines, and the “media bishops” of the Church of England, led by the Bishop of Norwich, the Rt Revd Graham James, have put a great deal of time and energy into submissions to the BBC Charter Review consultation: specifically, its review of religion and ethics.

They, together with the wide range of people who were consulted, including those from the main world faiths, together with agnostics and atheists, have challenged the BBC to consider how important an understanding of religion is in the world today — not only belief systems, but religion as practice and ritual, and how communities of faith actually live out what they believe.

Many of the people who now ran the BBC, we point out, grew up with an understanding that religion had had its day. But, instead, religion is a force to be reckoned with across the world. It is not in decline: it needs to be taken seriously and understood properly if we are to make sense of the world around us, understand our history and culture, and live in peace with our neighbour.

The BBC has listened. The BBC Religion and Ethics Review, published last month, makes positive and encouraging reading. The director general of the BBC, Tony Hall, writes in his foreword: “We know — our research tells us — that today’s audiences are interested in learning more in this area. People of all ages, and of all faiths and none, think it is important to learn about religion in general. They recognise that, if we truly want to make sense of the world, we need to understand the systems of belief that underpin it. For the BBC, this is a fundamental part of our responsibility. It has also, perhaps, never been more important for us to get it right.”

Much is promised in the review: there is a commitment to reaching as many people as possible, including younger generations; to portraying accurately the diversity of beliefs in our society; to help people understand their values and decisions; and, perhaps most significantly, to increasing specialist knowledge of religion in news, with a new post of Religion Editor, and a global team containing new reporters, with specific religious expertise.

The Church of England and the Sandford St Martin Trust have welcomed the report. The part played by the Trust and the bishops with specific responsibility for media affairs will be to monitor progress, continue to ask hard questions — and nudge when it is felt that pledges are not being honoured.

Who is going to ensure that what is promised is delivered? What are the timescales? Where are the financial resources? The proof, as they say, will be in the pudding.

But, as we begin this new year, in the light of the one born in Bethlehem whose story we are called to “proclaim afresh in each generation”, this renewed commitment by the BBC to religion, ethics, and belief in general can be nothing other than good news.

Can The BBC Keep The Faith?

How should TV portray people of faith?
Scroll to top