You are here: Home / Thinking about Thought for the Day

In a case of the newsmakers making the news itself, earlier this week the Radio Times published an interview with presenters of the BBC Radio 4 Today Programme in which they dismiss as “boring” the Thought for the Day contributions that are introduced around 7.45am each morning.  The result was a flurry of press coverage with pieces in The Telegraph , the Guardian, and the Independent among others.   The debate is hardly new. Thought for the Day has long been what might be referred to as a ‘Marmite’ kind of radio slot, i.e. some people love it; some people hate it.  The results of the Radio Times’ subsequent poll suggests as much as well as noting that some people would like the format tweaked to be more inclusive.  And it’s not the only output on Radio 4 that can excite strong feelings one way or the other – the Archers, Front Row or Quote Unquote can all excite equal fervour if less righteous indignation.  What do you think?  Our Chair, Bishop Nick Baines  has also been thinking about Thought for the Day.  His resulting blog, originally posted on his own website, follows here. 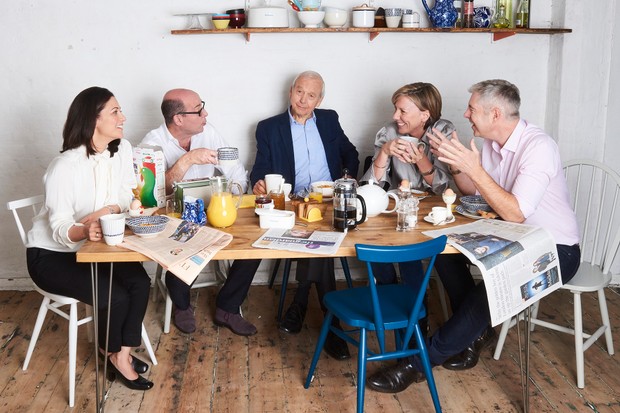 What is disturbing about the reported comments by the presenters is the staggering ignorance of what the slot is about. Set aside the arrogance that dismisses religious perspectives as irrelevant – rooted in assumptions that a five year old could drive an intellectual coach and horses through – and we are still left with questions.

Thought for the Day is not about privileging religious nutcases in order to appease an irrelevant subculture in the face of a BBC public service remit. It is also not about presenting religious views or views about religion. It is all about looking at the world through a religious lens, opening up perspectives that subvert the unconscious (or conscious) prejudices about why the world is the way it is – shining a different light on world events that the unargued for and unarticulated secular humanist assumptions undergirding the rest of the programme miss.

Underlying the protests against Thought for the Day (so hackneyed they are in themselves boring to anyone with a brain) is what I call the ‘myth of neutrality’. I am embarrassed to have to say it again. This myth, so effortlessly held by so many, is that there is a neutral space held by secular humanists, leaving those who have a religious world view somewhere up the loony scale. According to this assumption, a religious world view is so odd that it is potentially dangerous and has no place in the public square it should be imprisoned in the sphere of the ‘private’.

But, why is the secular humanist world view to be privileged as ‘neutral’? It isn’t.

Thought for the Day is a bold resistance to this nonsense. If we are no good at it, fire us, ruthlessly. But, then get in people who can do a better job at revealing the world and its events through the lens of a religious world view that challenges the easy and lazy assumptions of those who think their lens is either self-evidently true or neutral.

Over 85% of the world’s population hold an individual or social/communal religious commitment. In order to understand the world, we need to look through their eyes. This isn’t about proselytism, it is about something far more important: understanding and mutual coexistence.

Let us know what you think.  Has Thought for the Day had its day?  Or should its critics get a grip?  As Rev Giles Fraser suggested in his recent comment piece for The Guardian “Thought for the Day is two minutes and 40 seconds of God-talk in a three-hour radio programme about politics, sport and culture.  Discussions about the racing tips often take up as much time as that given over to the world’s faiths.”

Can The BBC Keep The Faith?
Scroll to top