You are here: Home / media 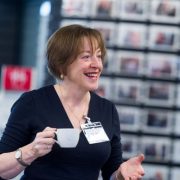 On the evening of 7 June the 2017 Sandford St Martin Awards were handed out during a gala ceremony held at Lambeth Palace.  Again this year, the Trust had the honour of hosting some of the most talented programme-makers, broadcasters and journalists engaging with the subject of religion, belief and ethics in the UK today.  Among them was the TV producer and writer Angela Graham who has written about the Awards in her blog.

Photos below are by Charlie Fordham-Bailey 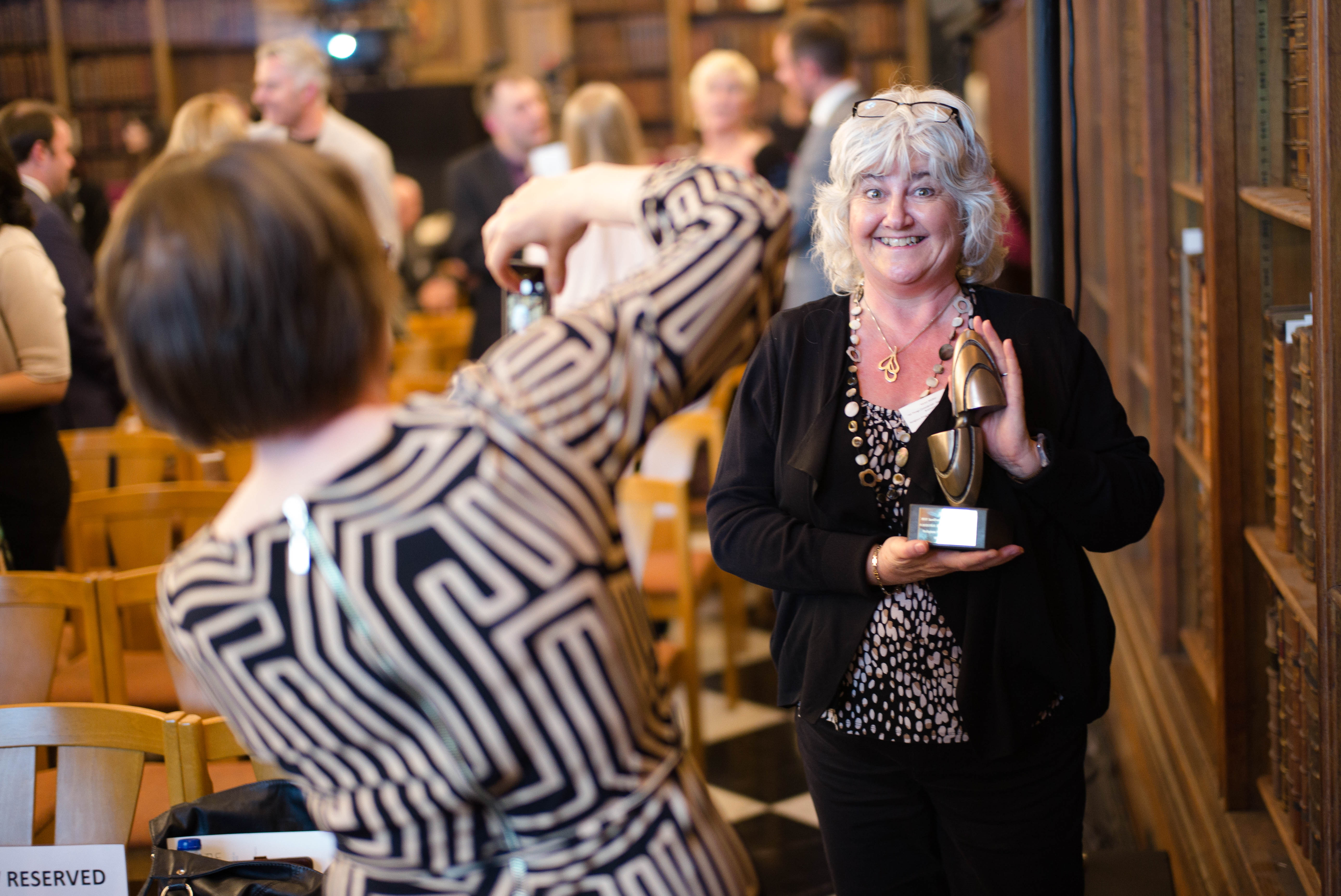 Karen Walker, Producer of ‘All Things Considered: Aberfan 50 Year Anniversary’ made by the Religious Programmes Department at BBC Radio Wales, winner of the 2017 Radio Award, photos by Charlie Forgham-Bailey

The Sandford St Martin Awards made me greedy. How could they tempt me with such a rich list of nominations and not expect me to want to indulge in all of them as quickly as possible!

Marian Partington on forgiving Fred and Rose West who killed her sister, or the great Marilynne Robinson on Fear, both in the Interview of the Year shortlist, or ‘Muslims Like Us’ with its reality-tv take on a major faith’s diversity and unifying core or, ‘The Selfless Sikh’ about a faith impelling humanitarian action … Could you blame me for wanting to absorb them all straight away?

Despite the range of topic and approach across the 30 finalists there is a prominent common factor, and it’s what makes the line-up such an attractive one: engagement with why people are making particular choices; helping or damaging others; living as they do. The programmes examine not only who’s doing what, when and where but the deep motivations that push them to grapple with the tangibles and intangibles of life.

Such interrogation is not confined to Religious Programming but this genre steps out into that intriguing area of an individual’s relationship to a Being or a Universal Agent and the ramifications of that for a person’s relations with others: the religio part of religion, the One with the Many. And the Absolute – it takes that on too.

The truths we live by appear to be increasingly various. Even those who live within the parameters of the most established of creeds must attend to a multiplicity of belief positions around them. I will definitely be looking out for the radio documentary, ‘Canada’s Atheist Minister’ (BBC Production North for BBC World Service) which offers insight into the experience of a pastor who found herself delivering a sermon in which she stated that she didn’t believe ‘in a God who answers prayer’ or fulfil many of the requirements usually expected of a deity and certainly not a Christian one. Radio can put me in touch with this fascinating experience.

I’d say it’s easier to get below the surface of atheism in Britain via the media than in face-to-face encounters. There is a substantial amount of ecumenical and inter-faith activity but far fewer opportunities for dialogue in depth between those of religious faith and those without it. This is the Cinderella dialogue in my own Church, the Catholic, despite encouragement from the Vatican.

Several years ago I trialled such an encounter group in Cardiff, calling it Meaning To Live because that name seemed to me an indication of the common ground. I don’t think we hit on the perfect methodology but we found a way to have the sort of open, mutually respectful, willing-to-learn, robust conversation we hadn’t found the opportunity to have anywhere else.

It concerns me that we don’t have many arenas in which we can examine belief in the sense wider than, but including, the religious. This is one reason why the media are so important and why it’s equally important to provide media professionals with the tools to handle issues of belief and faith well.

On the Sandford St Martin site are two blogs I’ve written about an initiative for journalists run by the training arm of the NUJ in Wales. This aims to give journalists access to expertise and resources which can enable them to improve their coverage of news and current affairs that have a religious or belief aspect. In Wales, until I gave a modest class on the subject this January at Cardiff University, no School of Journalism had offered any teaching at any level on religious literacy and, before these workshops, there was nothing on offer for professionals either. I’m glad to say the interest has been significant and we’re in discussion about a third event.

The profile of religious literacy is rising and, as it does so, critique of justification for it and of its worth relative to that of sociology is needed.  Prof. Adam Dinham’s work at Goldsmith’s is prominent. His book, Religious Literacy in Policy and Practice Bristol: Policy Press Dinham A & Francis M (eds) (2015) is essential reading.

It’s good to see the current BBC review of its Religious, Ethics and Philosophy programming under Mark Friend. If the Sandford shortlist is anything to go by, it’s the PSB BBC that is doing the heavy lifting in these fields.

As a broadcaster in Wales it was an especial pleasure for me that the Radio Award was won by ‘Aberfan 50 Year Anniversary’, a programme within the long-running, weekly religious affairs series, ‘All Things Considered’. Director, BBC Cymru Wales, Rhodri Talfan Davies tweeted last night, ‘Quality counts − a superb team who deliver each and every week’. They certainly do. Producer, Karen Walker and Presenter, Roy Jenkins are ‘modest beyond’, as the Welsh say. Karen would never tell you that the walls of her office are invisible beneath the array of awards acquired over the years. Now they have a trophy to find a spot for. 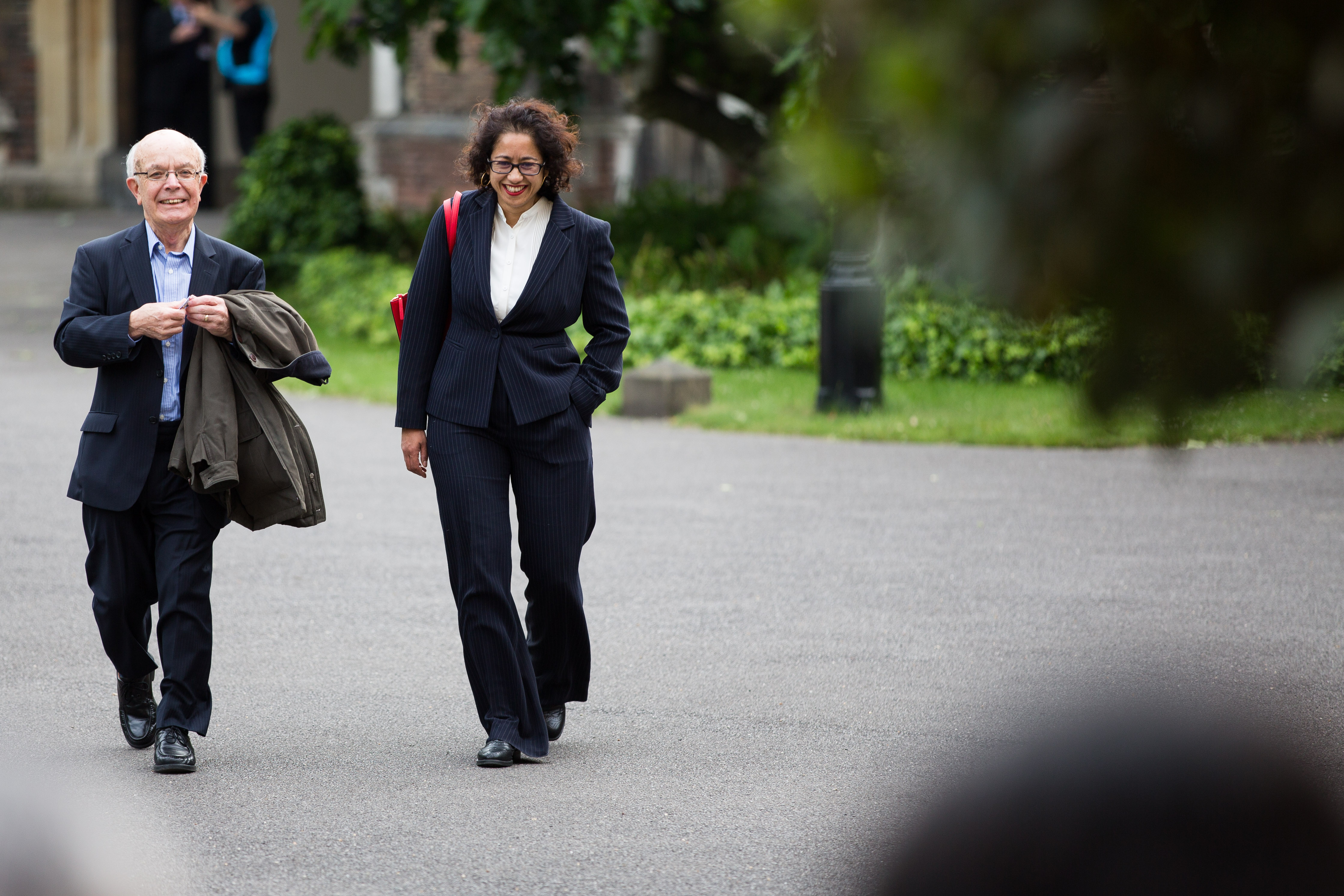 Find out more about Angela on her website: http://angelagraham.org/

In early May, an All Party Parliamentary Group on Religious Literacy in the Media was launched at Westminster with a round-table discussion moderated by the Sandford St Martin Trust Chair, the Rt Rev Nick Baines, Lord Bishop of Leeds.  Among those also participating in the event was Iftikhar Khan one of the founders, a CTO and futurist at Alchemiya Media.  What follows is his report for MuslimView and was first published on their website. 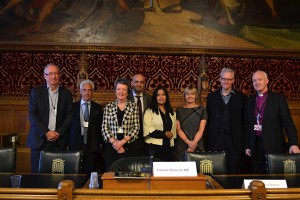 Yasmin Qureshi MP for Bolton South East launched the All Party Parliamentary Group on Religion in the Media with a round table session held at the Palace of Westminster on Wednesday 4th May 2016.

The stated aims of the APPG are to work for greater religious literacy in the media and political spheres, to foster a better understanding and representation of religion in coverage of news and culture, recognizing the priority of religion as a prime motivator for individuals and communities in the country. The APPG aims to encourage more diversity in media representation of religion. Also, under the public service broadcasting remit of the BBC and Channel 4, it will advocate the inclusion of a commitment to promote religious literacy.

Lord Baines (the Bishop of Leeds, and Chair of the Sandford St Martin’s Trust) very ably and engagingly moderated a panel discussion between several high profile speakers. Aaqil Ahmed, the Head of BBC Religion and Ethics spoke of the changing demographics within certain parts of the UK that, tied to underrepresentation and a lack of media understanding have led to troublesome coverage, for example the Trojan Horse issue in schools in Birmingham. An ignorance of the nature of more conservative views as in this instance will only lead to more entrenchment of withdrawal and isolation from society, rather than fostering understanding. Aaqil estimated that there is a 5-10 year window of opportunity to ameliorate this before the issue becomes of greater concern with the current status quo of mutual suspicions is unacceptable.

Roger Bolton, the former BBC Editor and Presenter (‘Sunday’ on Radio 4) noted that the default stance and credo in most mainstream journalism in the UK is of liberal secularism. He also provided figures showing that the budget for religious programming on ITV declined from £40M to £2M in the five years to 2013, and likewise from £40M to £20M on Channel 4; Channel 4 no longer has a Commissioning Editor for Religion.

Academic Dr Abby Day, the Research Director of the Religion Media Centre at Goldsmiths College opined that every newsroom should have at least one religion expert, and that a core element of all media studies courses should cover religion. There should be exchanges between religious media outlets and the mainstream media. Dr Day gave the regretful example of the Sun ‘newspaper’ carrying out a scientifically unrigorous survey that led to the front page headlines of ‘1 in 5 Muslims support terrorism’ and the subsequent tiny apology buried and hidden deep within the paper after censure by IPSO.

Dr Jenny Taylor of Lapido Media gained her doctorate studying the sociology of religion and in particular the migration of Muslims. She declared that the world is full of religion and that the religiously unaffiliated in the world population will decline from 16% to a projected 13% by 2050. Misrepresentation and bias in the western media does not reflect the way that religion shapes allegiances in the rest of the world. Dr Taylor also quoted Bernard Levin who observed that in the British language, “vicars” rhymes with “knickers” and that this (unconscious) word association leads to ambivalence in attitudes to organized religion in this country.

Sir Alan Moses, the Chairman of IPSO, and a lively orator, regretted the “unattended ignorant depiction of what communities in this country believe”, and that while the BBC and Channel 4 have a statutory obligation of public service broadcasting, the policies and regulation of the press is determined by a set of standards set by the editors themselves, and that this may not always coincide with the public interest. He also stated that he wished there was much more “intelligent and compassionate” discussion of faith in the media.

Finally, the historian and author Tom Holland mused that the broad consensus in the media reflects the automatic assumption that ignorance about religion is a source of pride. This narrow viewpoint ignores the fact that religion is a vast spectrum of opinion. Holland also noted that secularism is not religiously neutral, but is rather a Christian concept, mediated through Christian theologians and Popes, and hence we refer specifically to a separation of Church and State rather than as a general synecdochical term.

There followed a brief and spirited question and answer session from the floor, including opinions from various journalists and broadcast professionals and from Baroness Elizabeth Berridge and Martin Vickers MP who both sit on related committees, and Baron Idarjit Singh of Wimbledon (and regular contributor to Radio 4’s Thought for the Day) decrying the lack of representation on the panel of anyone from the non-Abrahamic faiths. Yasmin Qureishi MP did counter this point by pointing out that this was not by design, and that as a kick-off meeting, there was limited time in this session, and that in future there would be fairer representation to those of all major faiths.

It is to be hoped that the APPG builds on the objectives and aims declared in this inaugural session with the same unified approach to foster better representation and understanding of religious life within society through more accurate representation, and wider coverage.

Both MuslimView and Alchemiya welcome and are supportive of these developments as this is also one of the aims of both organisations to be a source and a resource for religious literacy concerning Islam and Muslims in political circles as well as in the media.